Martin succeeded with the design of a flare relief system at Clair Ridge shortly after leaving university.

Possessed with a strong understanding of the technical side of chemical engineering and the theory behind it, Plant Engineer of the Year Martin Clark was headed towards a career in academia before an industry placement turned his head.

It was an offer of a bp internship and a subsequent graduate programme when Martin realised that he could forge a successful career in industry and apply the theory he excelled in to create dynamic engineering solutions.

In one of his first major roles after graduating from university, Martin was tasked with the design of a flare relief system at Clair Ridge, a second phase development site located 75kms west of the Shetland Islands. To create a system that collects and discharges gas from atmospheric or pressurised process components to a safe location, bp would usually have used a senior process engineer from an engineering house for the purpose, given the high level of engineering standards required from such a role. But in this case a fresh pair of eyes was needed, and Martin was identified to lead the team as an engineer who could design it from the bottom up.

“It was a great mandate to be given and a lot of responsibility from a very young age; I relished that. I was based in London and was commuting for four years, but by the time I left we had designed a system that we were all proud of. We created a long-term solution that matched industry standards in terms of safety, in a place where we were recovering oil and gas,” said Martin.

Despite initially having apprehensions about his suitability to work in such a heavily scrutinised position, Martin soon realised that it was a great opportunity to grow as an engineer alongside mentors who could bring out the best in him.

“When I left university, I didn’t have the confidence of some of my peers; I would describe myself more as a silent runner. Initially, I was apprehensive, and I sometimes questioned myself: what if I do it wrong? My line manager didn’t tell me what to do – the good leaders charge you with the intent. They teach you the intent of what they expect, not how to do it. The best part was that it enabled me to think critically for myself,” added Martin.

Martin now finds himself at the centre of an industry in transition. The speed of change has gathered pace in recent years and bp has set out a clear ambition to become a net zero company by 2050 or sooner.

“I’m now 15 years in. There’s still a great career to be had in oil and gas because we’re  going to need all types of energy in the energy mix for many years to come, but we are going through an exciting energy transition that will create new opportunities.” said Martin.

“The oil and gas industry still provides huge amounts of energy and other resources to the world. The energy transition is a new era which, for me, brings much excitement.” 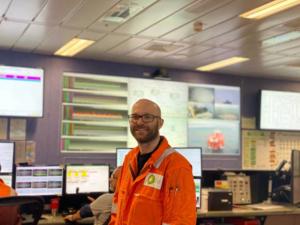 A safety ambassador, trouble-shooter and lead engineer supporting day to day operations, Martin is also a mentor to graduate engineers.

“What I get most pleasure from is coaching people and helping them understand concepts that they may have struggled with. For me, if I can get someone to explain a flow diagram – walk me from left to right, explain what the systems do and why they’re doing it, then I’ve done my job,” added Martin.

Winning the Plant Engineer of the Year, Martin says, is the ‘biggest honour’, and a recognition for being given the opportunity to work as part of several high-profile teams that have driven him on and challenged him to work outside his comfort zone.

If the next 15 years in the energy sector is as transformative as is expected, Martin will take with him a track record of pushing boundaries as a professional engineer.

Images: Top to bottom: Clair Ridge; installation of the flare boom at Clare Ridge; Martin in his current role at Glen Lyon.

Human factors in collisions: Stop me when I get to 23

Engineering Applications of Pneumatics and Hydraulics